Since it is not always possible to study the entire population, we need to rely on sampling to acquire a segment of the population to perform an experiment.

Before we see different types of sampling, let’s first define population and sample.

POPULATION: A population contains all members of a specified group.

SAMPLE: A sample is a subset of the population. 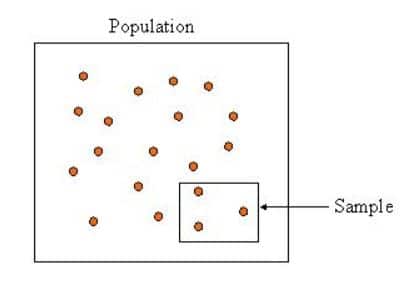 There are two types of sampling

In probability sampling, every element has a known chance (greater than zero) of being selected in the sample.

Here, every unit in the population has an equal chance of being selected as the sample.

It gives an unbiased representation of the total population.

Simple random sampling can be applied when the population is small and homogeneous.

Drawing three balls from an urn containing 200 balls is an example of a simple random sample.

Stratified sampling divides the population into non-overlapping groups or sub-population called strata, each of which is homogenous within itself.

We then choose a simple random sample from each stratum so that the elements have the same chance of being sampled.

For example, in a population, if boys represent 70% and girls represent 30%, then the respective sample size should reflect the same proportion.

Stratified sampling techniques are often used where the population is heterogeneous.

It divides the population into non-overlapping clusters, and then a sample of the cluster is selected randomly from the population.

There are two types of cluster sampling methods

One-Stage Sampling: All of the elements within selected clusters are included in the sample.

Two-Stage Sampling: First, the clusters are selected and then selecting samples from the sampled clusters.

In systematic sampling, every kth element from a sequence or list is selected to produce a sample of size n. The starting point is randomly chosen from within the first to kth item.

The value of k called the sampling cycle is determined by the formula.

Where N is the population size, n is the sample size and K is the size of the interval of selection

It is not appropriate to use systematic sampling where the population has some periodic patterns.

For example, if you sample daily sales and sample every seventh day, you will measure only sales on one particular day of the week which could lead to biased measurements.

Multi-stage sampling is a combination of at least two methods of sampling.

First, the population is divided into non-overlapping subpopulations or groups; then a random sampling is done on those groups to get a sample.

This method can be used if the population has a hierarchical structure(e.g., Country, states, cities).

There are situations where the probability that an individual is selected into the sample is unknown. In such circumstances, we can use non-probability sampling.

In non-probability sampling, some elements of the population have no chance of being selected in the sample.

It is similar to stratified random sampling. The population is divided into subclasses such as age, gender, sex, are used as strata.

Then a non-random sampling method is used to select data from one stratum until the required quota is fulfilled.

For example, in a population, if boys represent 70% and girls represent 30%, then the respective sample size should reflect the same proportion.

Also known as haphazard sampling. In convenience sampling, the samples are selected based on willingness or availability.

With this method, there is a high chance of introducing bias. Often used where there is time and cost limitations.

Snowball or chain referral sampling is a method where the researcher finds one member of a population and then asks him/her to refer to some other member who may participate in the study and expanding the selection in this way until we reach the maximum number of samples.

It can be used when the population is not easily identifiable or unknown.

In this article, we discussed different types of sampling techniques.

There are two main categories of sampling