Assumptions Made by Ordinary Least Squares(OLS)

Ordinary Least Squares(OLS) is a commonly used technique for linear regression analysis. OLS makes certain assumptions about the data like linearity, no multicollinearity, no autocorrelation, homoscedasticity, normal distribution of errors.

Violating these assumptions may reduce the validity of the results produced by the model.

There are several statistical tests to check whether these assumptions hold true.

In this article, we’ll discuss the assumptions made by OLS in detail and see how to test them in python.

We’ll start by importing the necessary packages and import the Boston housing dataset.

We’ll use statsmodels to build a linear regression model. You can learn more about statsmodels by reading the article Introduction to Statsmodels. 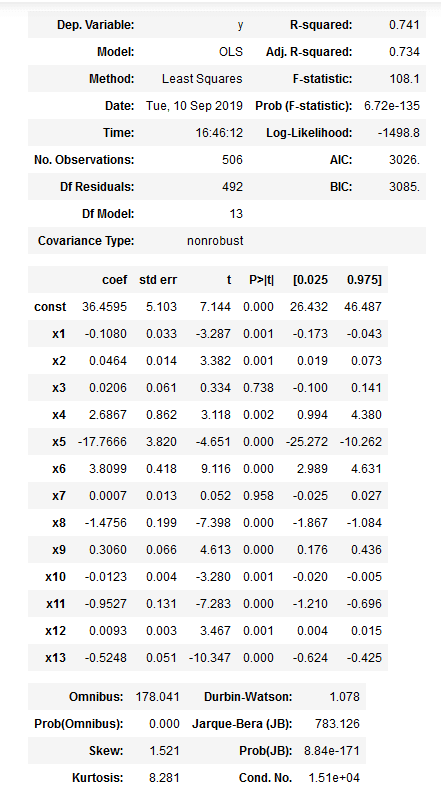 The first assumption we are going to see is linearity.

This assumption states that the relationship between the dependent and the independent variable should be linear.

We can test this assumption with a simple scatter plot.

A plot of the fitted versus residuals values can be used to test this assumption. This plot indicates if there are non-linear patterns in the residuals and thus in the data as well. 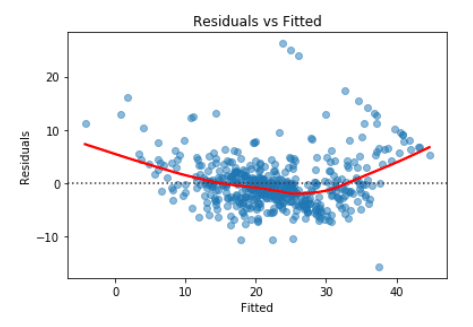 We can clearly see a pattern in the plot indicating non-linearity. An ideal plot will have the residuals spread equally around the horizontal line.

Multiple linear regression assumes that there is no multicollinearity in the data.

If the VIF is high for an independent variable then there is a chance that it is already explained by another variable.

Independent variables with VIF value greater than 10 may be correlated.

However, independent variables with VIF value greater than 100 indicates certain multicollinearity and should be eliminated.

There is no serious violation of this assumption. But still, there are variables like NOX, RM, and PTRATIO with high VIF  values and these may require further investigation.

Errors should be normally distributed:

Another assumption made by the OLS is that the errors are normally distributed. Plotting the errors will show the distribution of errors.

Q-Q plot is a graphical technique used to determine whether the residuals are normally distributed.

If the points are normally distributed then the points will fall on a straight diagonal line. 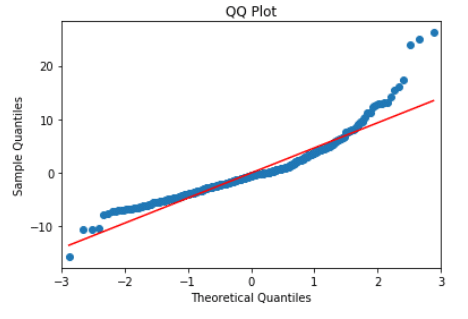 From the above plot it looks like there are many points falling away from the red line indicating that the errors are not normally distributed.

Autocorrelation occurs when there is a correlation between the error values. It is also called as serial correlation.

It mostly occurs in time series data because data collected over time will more likely dependent on one another.

One of the common tests for autocorrelation of residuals is the Durbin-Watson test.

The Durbin-Watson test is printed with the statsmodels summary.

The Durbin-Watson score for this model is 1.078, which indicates positive autocorrelation.

This tongue twister simply means that the variance of the error terms should be constant with respect to the independent variable.

We can use the scale-location plot to test this assumption.

If the plot depicts a clear pattern like a cone-shaped pattern then it is not homoscedastic. The absence of homoscedastic is called as heteroscedastic.

Presence of outliers in the data is one of the reasons for not holding homoscedasticity.

Violation of this assumption may give unreliable or biased standard error of the coefficients. 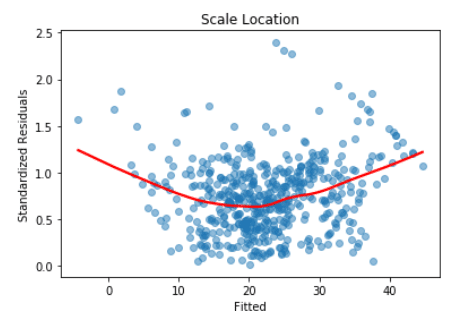 We can see that the variance of the residuals in not random. Even though it is not a cone-shaped we can still notice a pattern.

In this tutorial, we discussed several assumptions made by OLS like linearity, no multicollinearity, no autocorrelation, homoscedasticity, normal distribution of errors.

We then tested whether these assumptions hold on the Boston housing dataset.

Even though it is not an assumption, it is essential to check for the presence of outliers.

It is better to remove the outliers since it affects the precision of the regression estimates.

Techniques like Box-Plot can be used to detect and remove outliers from the data.