In this tutorial, we’ll discuss how to build a linear regression model using statsmodels.

Statsmodels is a Python module that provides classes and functions for the estimation of many different statistical models, as well as for conducting statistical tests and exploring the data.

Statsmodel is built explicitly for statistics; therefore, it provides a rich output of statistical information.

In general, regression is a statistical technique which is used to investigate the relationship between variables.

The main objective of linear regression is to find a straight line which best fits the data. 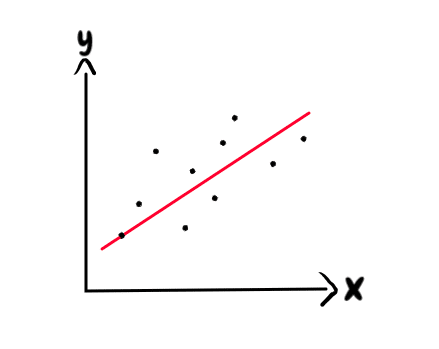 If we have a single independent variable, then it is called simple linear regression.

If we have more than one independent variable, then it is called multiple linear regression.

Multiple regression is given by the equation,

If you want to learn more about linear regression and implement it from scratch, you can read my article Introduction to Linear Regression.

Now let’s use the statsmodels to build a linear regression model.

Now we can import the dataset. You can download the dataset using the following link.

The dataset contains information on sales of a product in 200 different markets, together with advertising budgets in each of these markets for various media channels: TV, radio, and newspaper. 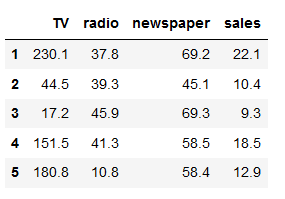 We’ll now run a linear regression on the data using the OLS function of the statsmodel.formula.api module.

The formula notation has two parts, where the name left to the tilde(~) indicates the response variable and the variable name to the right of the tilde is the predictor.

Now we can fit the data to the model by calling the fit method.

Let’s view the detailed statistics of the model. 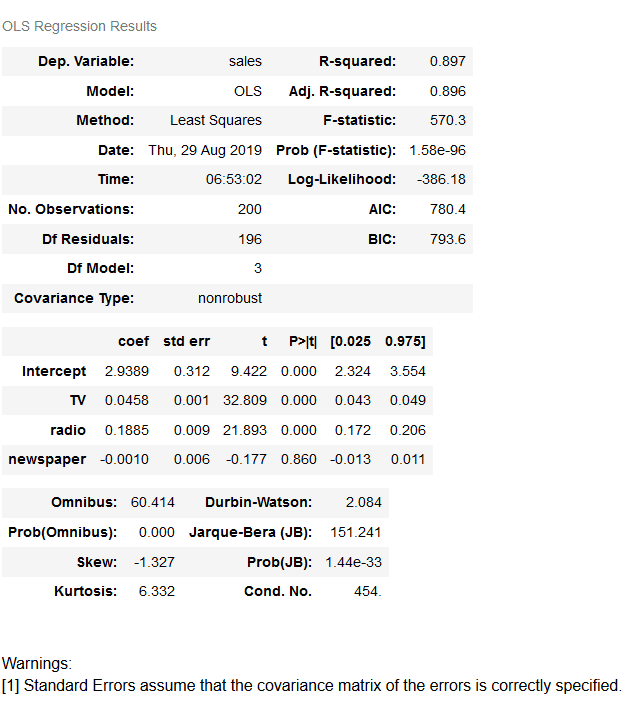 In the above diagram, we have the results of our linear regression model. As you can see, it provides a comprehensive output with various statistics about the fit of our model.

The first table is broken down into two columns. Let’s start by explaining the variables in the left column first.

Dep. Variable: It just tells us what the response variable was

Model: It reminds us of the model we have fitted

Method: How the parameters of the model were fitted

DF Residuals: Degrees of freedom of the residuals, which is the sample size minus the number of parameters being estimated

DF Model: The number of estimated parameters in the model, without taking the constant into account

R-Squared: Also known as the coefficient of determination measures the goodness of fit

Adj. R-Squared: R-Squared adjusted for the number of predictor variables

Prob(F-statistic): F-statistic transformed into a probability

AIC: Akaike Information Criterion, assesses model on the basis of the number of observations and the complexity of the model.

std err: Represents the standard error of the coefficient

t: The t-statistic value, for testing the null hypothesis that the predictor coefficient is zero.

[95.0% Conf. Interval]: The lower and upper values of the coefficient, taking into account a 95% confidence interval

The last table gives us information about the distribution of residuals.

Skewness: A measure of the asymmetry of the distribution

Kurtosis: A measure of how peaked a distribution is

Omnibus D’Angostino’s test: A test of the skewness and kurtosis that indicates the normalcy of a distribution

Prob(Omnibus): Indicates the probability of the normality of a distribution

Jarque-Bera: Like the Omnibus, it tests for skewness and kurtosis

Durbin-Watson: A test for autocorrelation(occurs when there is a correlation between the error values)

Cond. No: A test for multicollinearity(occurs when the independent variables are highly correlated)

Now let’s use the statsmodel.api module to build the model

Now we can initialize the OLS and call the fit method to the data.

Now we can call the summary() method.

In this article, you have learned how to build a linear regression model using statsmodels.

Statsmodels is an extraordinarily helpful package in python for statistical modeling. Since it is built explicitly for statistics; therefore, it provides a rich output of statistical information.

We can either use statsmodel.formula.api or statsmodel.api to build a linear regression model.

We also build a linear regression model using both of them and also discussed how to interpret the results.