However, there is a major limitation to their existing models. So far none of their models is specifically tailored for a particular individual or a profile.

That means that Elo cannot deliver fully personalized brand recommendations to its customers, nor can it filter unwanted ones.

What is loyalty? According to the Data_Dictionary.xlsx, loyalty is a numerical score calculated 2 months after historical and evaluation period.

We need to “develop algorithms to identify and serve the most relevant opportunities to individuals, by uncovering signals in customer loyalty”.

Imagine being hungry in an unfamiliar part of town and getting restaurant recommendations served up, based on your personal preferences, at just the right moment. The recommendation comes with an attached discount from your credit card provider for a local place around the corner!

Right now, Elo, one of the largest payment brands in Brazil, has built partnerships with merchants in order to offer promotions or discounts to cardholders. But do these promotions work for either the consumer or the merchant? Do customers enjoy their experience? Do merchants see repeat business? Personalization is key.

Elo has built machine learning models to understand the most important aspects and preferences in their customers’ lifecycle, from food to shopping. But so far none of them is specifically tailored for an individual or profile. This is where you come in.

In this competition, Kagglers will develop algorithms to identify and serve the most relevant opportunities to individuals, by uncovering signal in customer loyalty. Your input will improve customers’ lives and help Elo reduce unwanted campaigns, to create the right experience for customers.

The datasets are largely anonymized, and the meaning of the features are not elaborated. External data are allowed

historical_transactions.csv – up to 3 months’ worth of historical transactions for each card_id

merchants.csv – additional information about all merchants / merchant_ids in the dataset.

new_merchant_transactions.csv – two months’ worth of data for each card_id containing ALL purchases that card_id made at merchant_ids that were not visited in the historical data.

sample_submission.csv – a sample submission file in the correct format – contains all card_ids you are expected to predict for.

Train: It includes the ID of the card, the year and month when the card was first activated (first_active_month), and 3 anonymous classification features (feature_1, feature_2, feature_3), as well as the target variable loyalty score.

Test: The test set is the same as the training set except that there is no target variable. 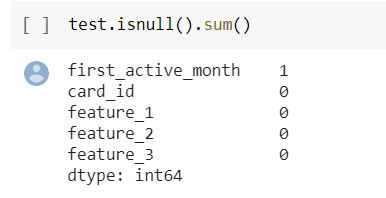 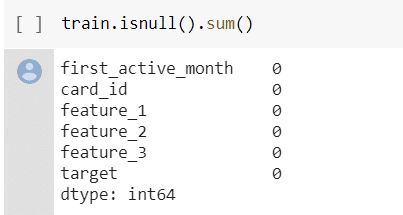 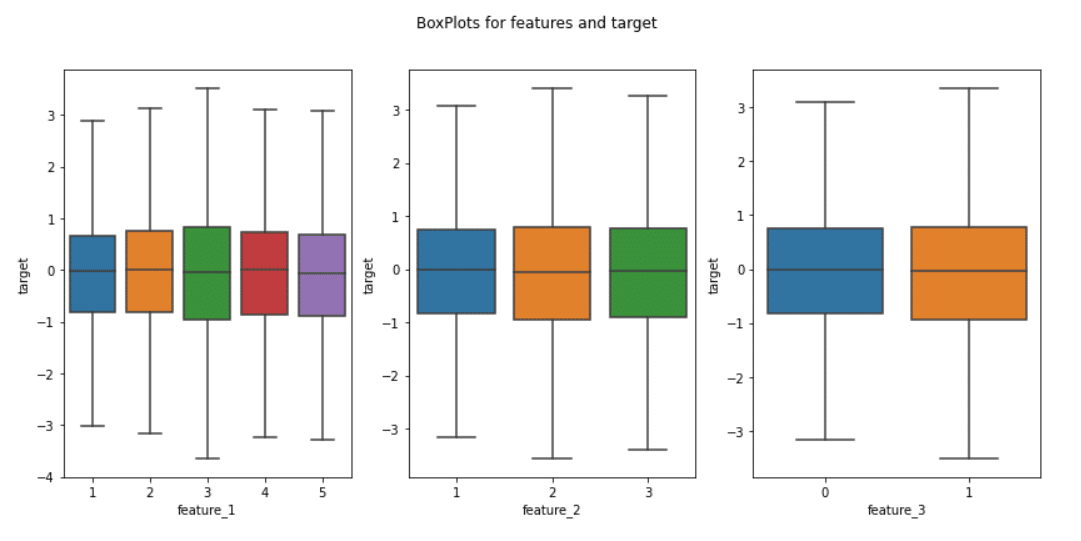 In the above box plot we plot the features in the train set against the target values. All the three features have a similar distribution with almost same mean and other values like min and max.

It doesn’t look like these will be helpful in predicting the target values. So we need to create additional features. Let’s plot the train and test set distribution.

From the above plot we can be sure that the train and test set have almost same distribution. So there is no need for time based splitting.

The following diagram is the histogram of the target variable. 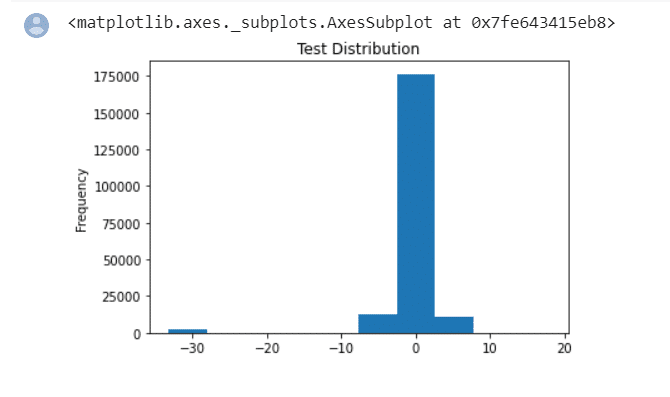 As we can see even though it looks like the values are normally distributed around a central value if we take a closer look there are few outliers. 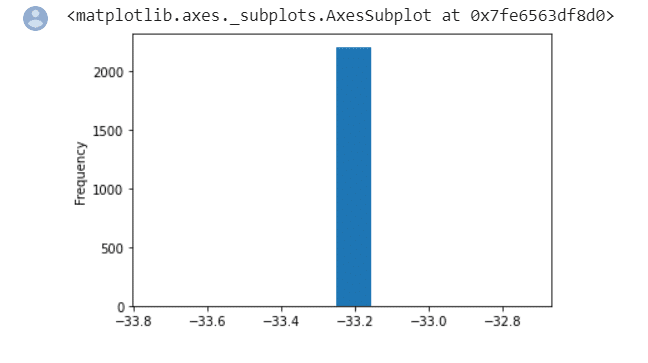 All of the outliers are having a value of -33.2

We cannot simply drop the outliers because these outliers can also be present in the test set. So we need to find a way to work with the outliers. 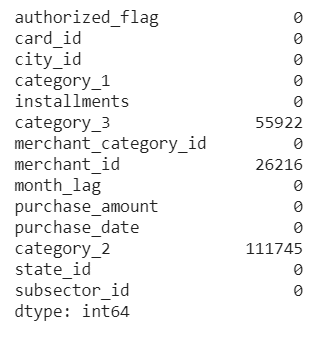 As we can see from the above image three features in the data set has null values. Let’s print the percentage of values missing.

In category_2 there are almost 6% percentage of the values are missing. These values should be imputed before feeding it to the model. 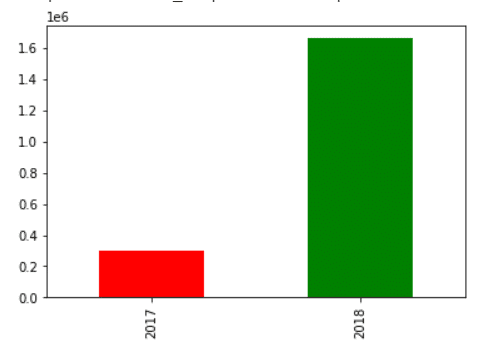 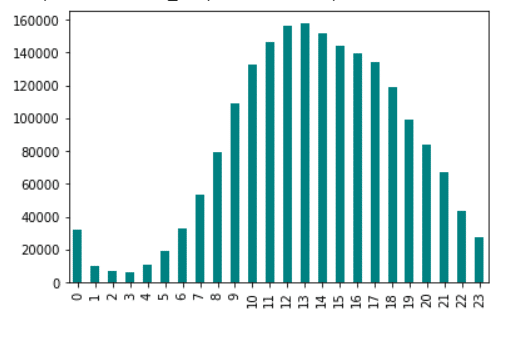 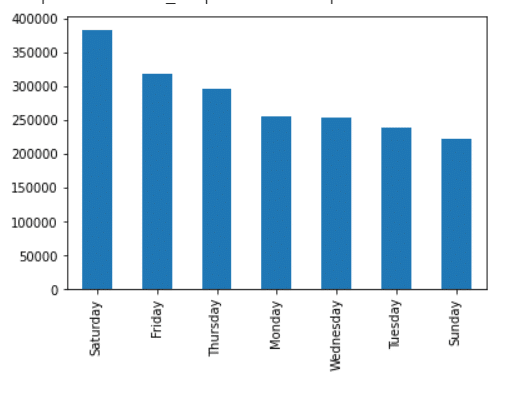 From the above plots we can infer that we have data for two years 2017 and 2018 and a lot of purchases are made during the year 2018 in the given data.

So creating features like hour, whether a day is weekend or not or whether it is a holiday could be useful. 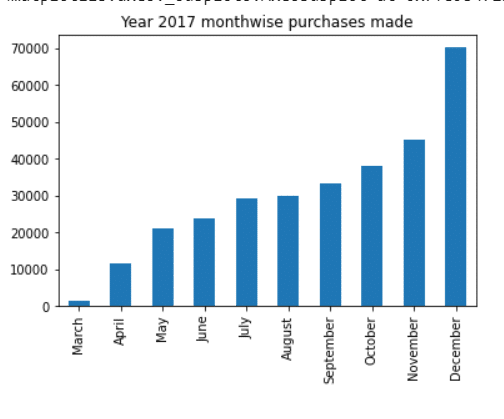 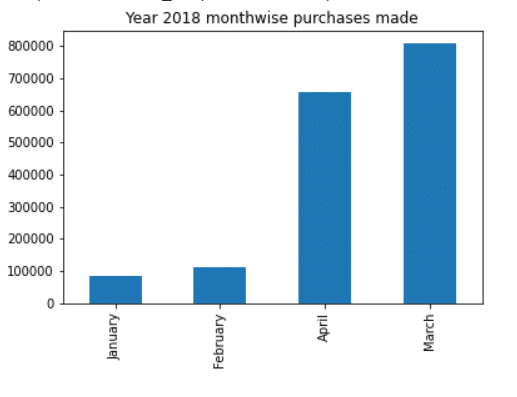 The above two plots show the purchases made month-wise for the years 2017 and 2018.

So we could create features like whether a purchase is made 90 days before a festival or not.

Let’s calculate the VIF scores and see how the variables are correlated. Value Inflation Factor is a method to check the multicollinearity between variables. You can read the part No Multicollinearity in my article Assumptions made by OLS to learn more about VIF scores. 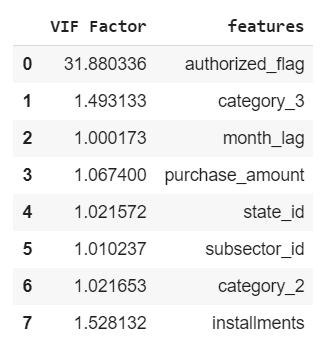 Except for the feature authorized_flag which has a VIF score of over 30 which indicates possible correlation, all other features scores are well under 10 implying that there are no serious cases of multi-collinearity.

Merchants: Merchant information. Mainly the merchant’s pipeline information, not much help in the competition. However let’s explore this data. 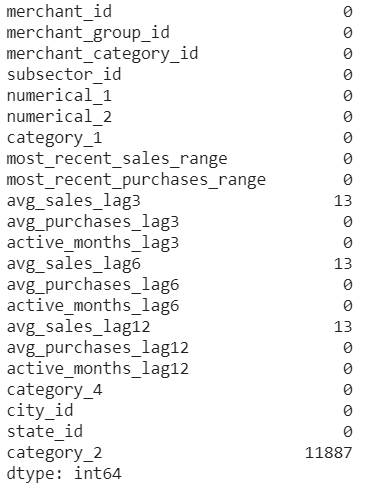 Four of the features in the data set has null values. However except for category_2 the other 3 features have very small only 13 entries are null values. So, we can impute it with mode.

These three are categorical features.

Category_2 take five values from 1 to 5

As these are categorical features these should be one hot encoded before feeding it to the model.

These two are numerical features. One thing to note here is that the distribution of the data for the two features looks identical. Let’s investigate further by printing the five summary statistics values. 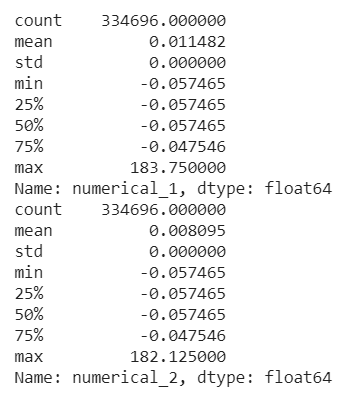 Even the box plot shows the same there is not much difference.

However, the features numerical_1 and numerical_2 looks more like a categorical feature than numerical.

Both the features take only 920 distinct values comparing that there are a lot of data points. Even if they are numerical they are not going to be useful as the variance of these features is 0.

Let’s calculate the VIF scores for the features 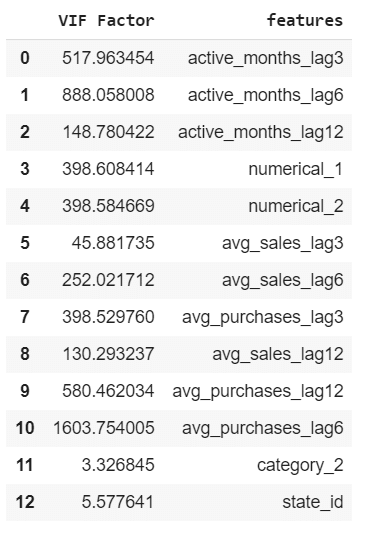 Let’s remove some of the correlated features and calculate the VIF scores again. 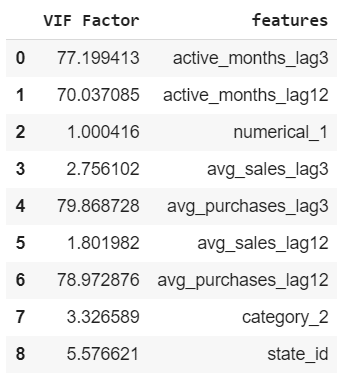 After removing some of the highly correlated variables we can see the drastic change in the values.

Eventhough there are variable with VIF greater than 70 instead of removing those right away we can train a model with and without them and check the performance.

The following is the correlation matrix 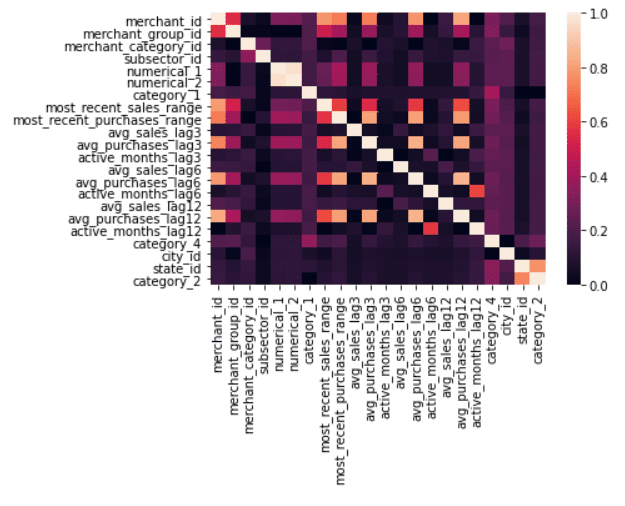 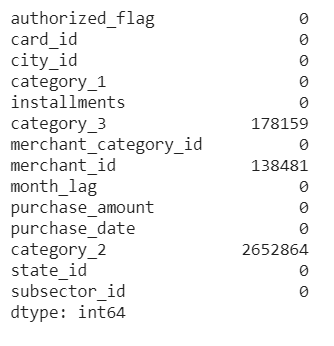 There are null values in the variables category_3, merchant_id and category_2. In category_2 there are almost 9% of the values are missing. These values should be imputed. In the next section we’ll see how we can impute these values. 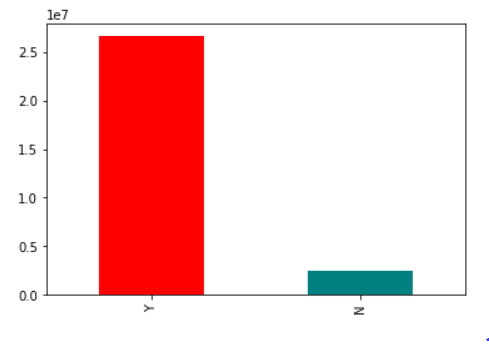 Let’s see the percentage of authorized and unauthorized transactions. 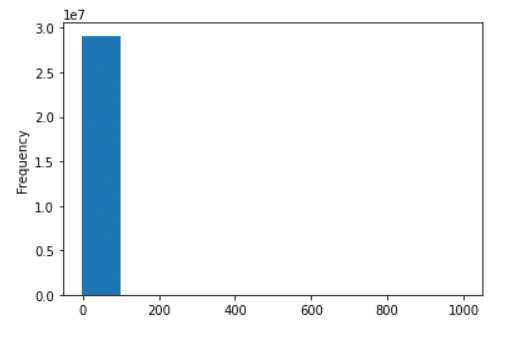 The above plot is the distribution of values for the installment feature. It is quite strange that the value of installment ranges from 0 to 1000. Let’s investigate further by looking at the value_counts. 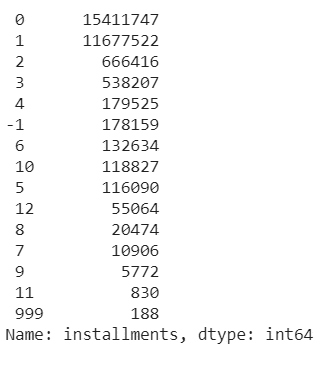 -1 could be used to fill null values. Let’s try to find what 999 means. Let’s see how many transactions are authorized if the installment is 999. 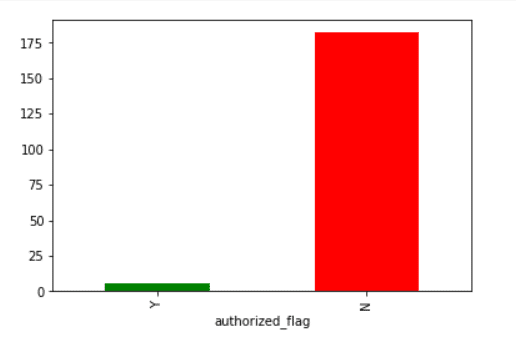 As we can clearly see a lot of transaction which has installment of 999 are not-authorized. So the value 999 could denote fraud transaction.

We’ll use KNNRegressor for the numerical features avg_sales_lag and use LogisticRegression for categorical feature category_2. 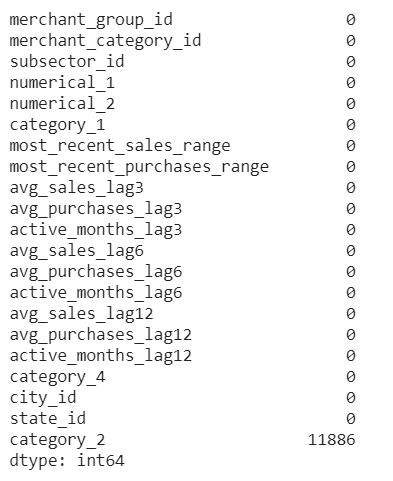 Now we’ll use LogisticRegression to impute the categorical values. 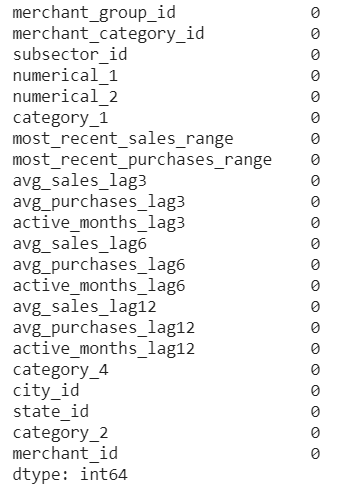 We have imputed all the missing values in this data set. Similarly we can do the same for other datasets also.

After imputing all the missing values we have to one hot encode all the categorical features.

The following snippet of code will transform all the categorical variables in the new merchant data.

I managed to create around 330 features. Some of the features I created are.

The following is the sample list of features created.

Since we have a lot of features around 340 it is always good to select features based on feature importance.

We’ll use Recursive Feature Elimination method to select the features.

After the feature selection we are left with 254 features. We’ll use the features which are selected by the RFE for building the model.

I have trained a total of 9 models. The following is the comparison of the performance of the models. 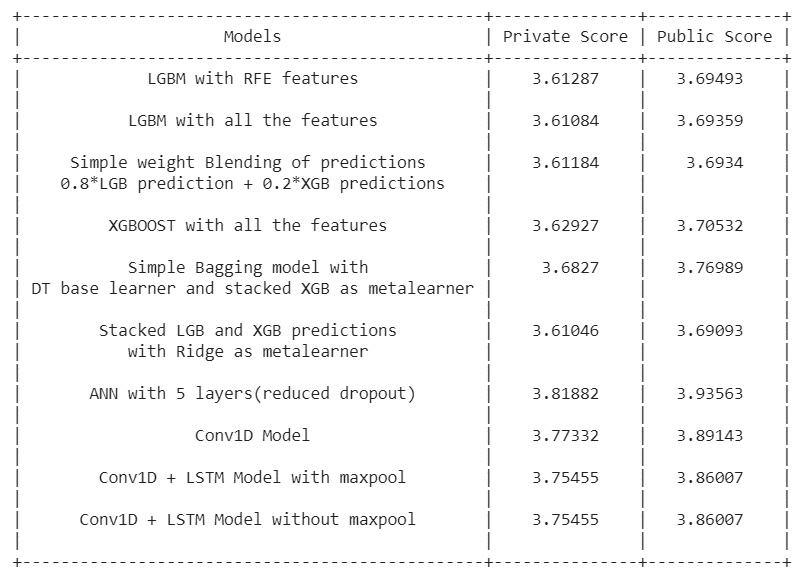 We’ll first train a Lightgbm model using the features trained by the Recursive Feature Elimination. The hyper parameters for the Lightgbm  model were tuned using Optuna.

The following are the values returned by Optuna.

We’ll use these parameters to train the model.

The below is the score we got upon submission in Kaggle.

Let’s train the XGBOOST model with all the features.

Not as good as the LightGBM model. Let’s try blending the predictions of LGB and XGB. We’ll give 80% weight to the LGB predictions and 20% to the XGB predictions.

The score which we obtained from blending is better than the XGBOOST model.

Let’s try training a meta-model on the predictions of LGB and XGB. We’ll train a Ridge as a meta-model.

Stacking the model increases the performance of the model by 0.004 Our previous best score was from a single LGB model which is 3.61084

Let’s try some Neural network based models and see whether we can increase the performance.

First I tried a simple ANN  with 5 layers.

Upon submission on Kaggle I get a score of 3.81882 which is far worse than the LGB and stacked model.

The score improved comparing with the ANN model. The score we get is 3.68342. However it is still not as great as a single LGB model.

Our best model i.e., the stacked model of XGB  and LGB puts us in the top 4% in the leaderboard.

We started off with detailed Exploratory Data Analysis. Based on our findings in the EDA we performed some pre-processing steps like imputing missing values using ML models, creating new features as the features which are inherently present in the dataset are not that much useful etcetera.

We created a total of 340  features. Then we performed Recursive Feature Elimination to select important features. At the end of RFE we are left with 274 features.

We tried a variety of models. The models lightGBM and XGBOOST performs well for this data set. The stacking of these two models gives us the best score.

The neural network based models were not that much performant when compared to LightGBM or XGBOOST.

If we want to further improve the performance, for starters we could train different models to predict the data with outlier and without outlier separately.

We can try linear stacking as described in the 1st place solution which gives him a good performance boost.

As far as neural network is concerned we can try different architectures to increase the performance of the model.

To get the complete code visit this GithubRepo.